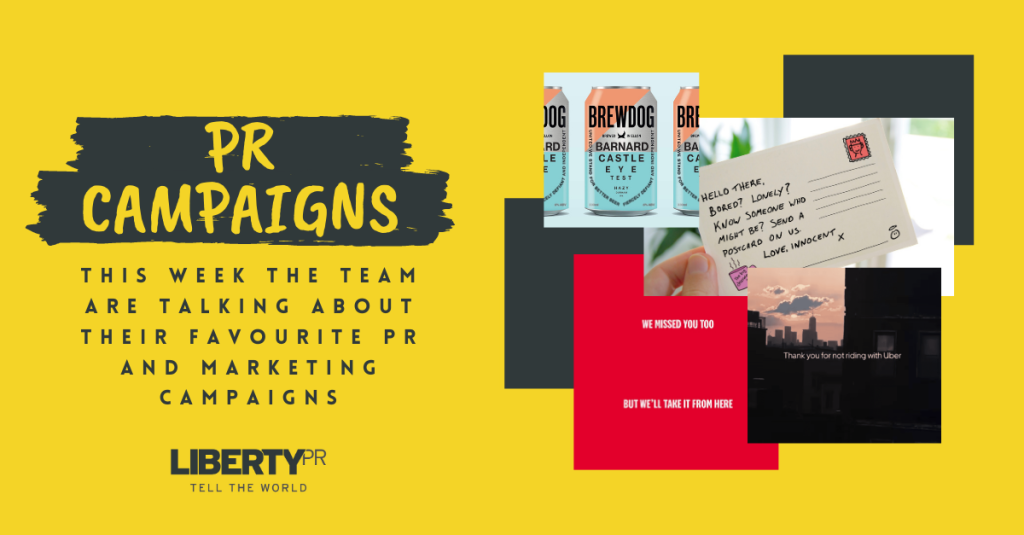 This week the team are talking about their favourite PR campaigns and what made them so successful or in some cases, nightmare-inducing…

Known for its captivating campaigns, Innocent has come up with yet another successful idea – sending free postcards to customers’ friends and family. The consumer only needs to go onto the Innocent website, personalise a card and fill in the recipient’s details, and the rest is done for them.

The cost to the company is minimal but the gesture has a lasting impact. The campaign has taken a simple idea, put the Innocent name to it, and helped its audience achieve the one thing people are craving the most – human connection.

During the height of a national lockdown, you would have forgiven a brewery company for drowning their sorrows as their profits diminished, but BrewDog decided this was the perfect opportunity to unite the nation in its time of need.

After Dominic Cummings – who needs no introduction – put himself in the media spotlight by driving his family from their London home to Barnard Castle in County Durham, the Scottish brewery firm created a limited edition hazy IPA, called ‘Barnard Castle Eye Test’. The cans, which featured some playful artwork designs, were then sold by BrewDog, with the profits allowing the brewery to fund more than 100,000 bottles of much-needed hand sanitizer for the NHS.

BrewDog sold 648,768 cans of the beer, despite customer traffic crashing its website for nine hours after launch. It was the perfect beer for the perfect storm, and a creative yet simple PR opportunity delivered with huge success.

Simon: Reebok – ‘Belly’s gonna get you’

It’s now 20 years since it first hit our screens, but Reebok’s Belly’s Gonna Get You campaign is still the one TV ad which stands out in my mind more than any other. While the action sequences featuring a man sprinting through the streets while being hotly pursued, vaulting over a fence and clinging on for dear life from the top of a multi-storey car park while a motorcycle flies over his head and crashes into the river below, were memorable enough, it is the hideous vision of his pursuer that haunts me to this day – a gigantic bloated stomach which bounces with improbable speed across the ground.

After the chase reaches its dramatic conclusion, a close-up shot of the sole of the man’s right trainer reveals the words ‘lose the beer belly’. And if this monstrous spectacle couldn’t terrify people into taking up exercise, it’s hard to imagine what would.

Implementing a theme of playful cruelty, the PR campaign leading up to the release of The Grinch’s 2018 remake superbly captured the essence of the main character of the film.

Strategically placed billboards and posters featuring quotes such as “Your date is just here for the popcorn”, “I could watch you crawl through traffic all day” and “Airport traffic puts me in the holiday spirit”, accompanied by The Grinch’s sly grin, caused quite a stir on social media, with the ads amassing thousands of shares online.

The Grinch PR campaign sticks out to me because it created a charming collection of advertisements that used the characteristics of the product perfectly to generate a buzz that successfully reached a wide audience.

Throughout the lockdown, KFC has been making the most of a tricky situation, using safety guidance and lockdown measures to its strengths and encouraging customers to interact with the brand online.

In the first few months of lockdown, the company went viral with the #RateMyKFC trend, where the brand rated fast food fans’ attempts to create their own fried chicken while the store remained closed.

In more recent weeks KFC has ‘pressed pause’ on their famous ‘finger licking good’ slogan and has instead reached out to customers across the country to help find a temporary alternative.

Not only has KFC kept finding imaginative ways to get people talking about the brand by sharing its outrageous and comical slogan suggestions and terrible attempts to create the finger licking good food at home, the company is also showing that its brand is interactive and customer-friendly by asking the audience to actively participate in campaigns.

When our homes first started to become our offices, gyms and schools, and worry began to fill the air with the uncertain times ahead, some very tough decisions had to be made throughout the economy, with many companies having to completely restructure their plans for the future.

Around a month into the lockdown, Uber released a short video ad that was designed to depict self-isolation in a unifying and moving way. The campaign was titled ‘Thank You For Not Riding’, which works both as a humorous yet selfless slogan, and portrays Uber as a brand which puts its customers and their safety before profit. And as a frequent Uber user, this automatically made me gain more respect for the brand.

Uber was able to take a negative event (its service temporarily closing) and turn it into something moving which presented the company in a positive light, depicting the idea that they put people before the business.